Bericht inhoud: Hello,
I descend from the DRUIJF / TRAUB(E) family and have researched them since several decades.
I would be happy to share my information with members of this forum.
Kind regards, Alan

I wonder whether DRUIJF/TRAUBE is indeed s grape. It might have been a misspelling of DUIJF/TAUBE = pigeon from the Hebrew Yona from which the yiddish feminine name Teibel, amongst Dutch jews ‘Duifje’. Amongst Dutch Jews is the family name DOOF (= deaf), irroneously from the German ‘taub’, but indeed also from ‘taube’, pidgeon and thus…yona! As a male Yona is ofcourse one of the minor prophets in the Bible.
Ze’ev Bar

In the case of all the TRAUB(E) /DRUIJF family members presently documented in “my” tree the name’s etymology is certain:
A new house in the Frankfurt ghetto (Judengasse) by the name Traube is mentioned for the first time in 1514. It was built before 1511, at which point it was still known as the house next to the stable. In 1599 the Traube was split into three houses: the rote Traube (red grape), the goldenes Fass (golden barrel) and the grüne Traube (green grape).
We know the TRAUB(E) family took their name from the Traube or one of these daughter houses since the Traub family can definitely be traced back to Alexander (the mutual ancestor) who resided at the Rote Traube in 1625 and died in 1670”.
All known descendents of Alexander, who carry the name Traube are descendents of his son Wolf. Wolf was rabbi of Heidingsfeld near Würzburg (1670?-1681), of Mainz (1681-1687) and of Witzenhausen and Hessen (1688-1707).
Two sons and one daughter of Wolf are documented:
– One son, Alexander, founded a branch of the family in Hamburg- The other son, Meyer, founded the family branch in Amsterdam. There the name was often translated and    became Druif
– Several descendants of a daughter, Merle, who lived in Kassel, adopted TRAUBE as their family name in the  nineteenth century.
Alan Ehrlich. 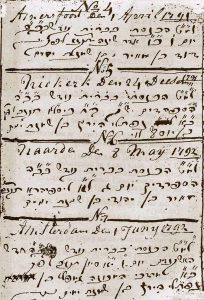